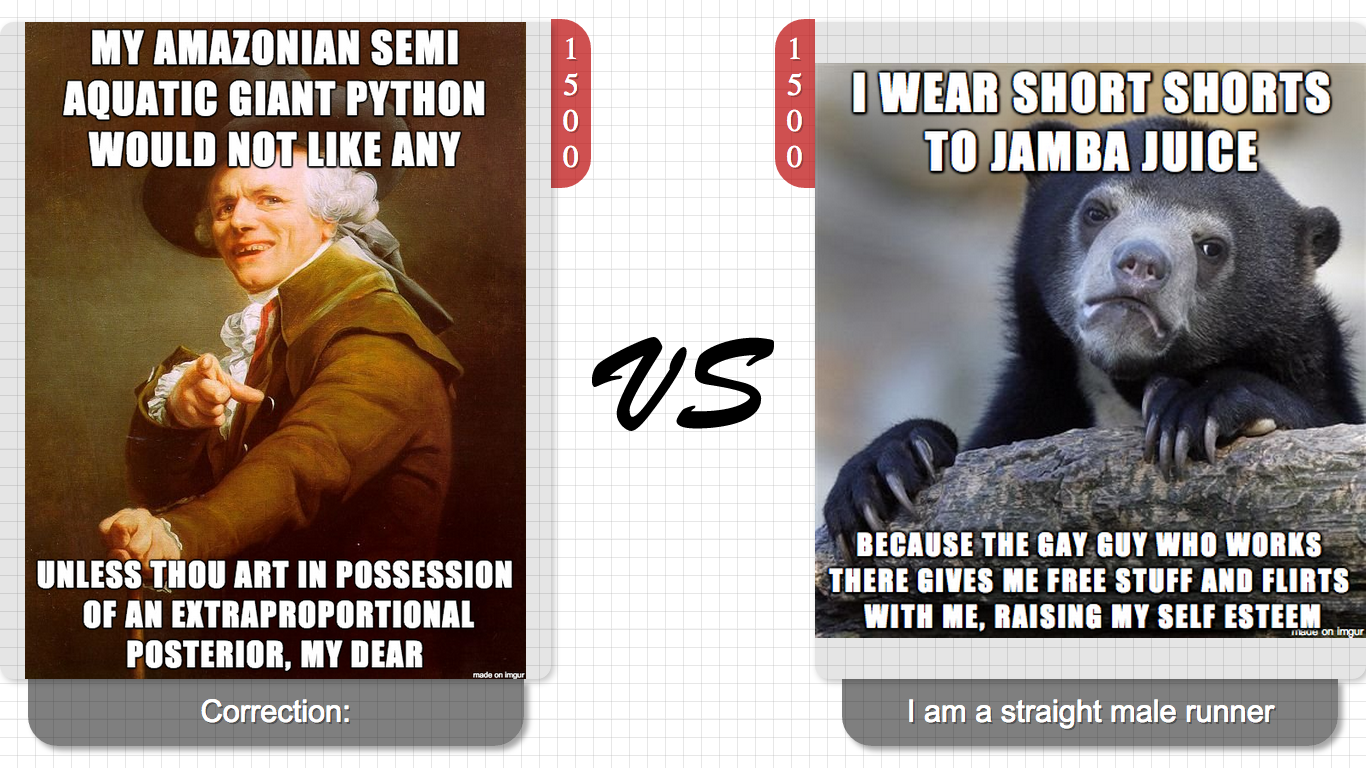 Take 8 funny pictures through a single-elimination tournament to determine who is the funniest! Playable on any modern web browser (including mobile devices), this game includes a few interesting features such as global ranking of the images regardless of tournament format and a color commentator who uses this information to talk about the match.

This is a work-in-progress demonstrating some of the best of what I've been using professionally lately. The server-side components are written in Python, and the front-end has a full-featured from-scratch MVC framework. Unit tests exist for all components, though coverage keeps bouncing around as I keep playing with various experiments. The API is fully documented, though only enough of it is implemented to run the game in its first iteration.

This is an open source project, and I hope that others will be able to use it in the future as a reasonable demonstration of how modern web applications can be put together, and how well-defined APIs permit interoperable clients to be easily written.

Fork this project on GitHub!

Picture this: dynamically-generated Super Mario Bros. with rogue-like RPG elements and a panic-inducing time limit, running on the Ouya or other Android devices. Just 5 Minutes started as an exercise in learning 2D game programming for the Android, building off of Notch's (in)famous "Infinite Mario" codebase.

This has been waiting on getting decent commercially-usable artwork for roughly forever, though recently some usable sprites became available over at Open Game Art, so who knows?

All NPCs MUST DIE!

A twin-stick shooter with its heart firmly planted in Robotron and its tongue firmly planted in cheek. The key feature on this game is that the weapon has more than 10 different attributes, each of which can be tweaked individually. This means that the guns in the game behave in all sorts of surprising and amusing ways, such as strange squiggly paths or even just a cloud of bullets that surrounds and protects the player.

This began as two experiments in one: how does a 2d game engine really work, and how does the HTML 5 canvas work. A more ambitious Android version suitable for playing on the Ouya is in the works, but in the meantime the original on the site is still fun to play.

Take Cards Against Humanity, put it on the web, and let people make their own answer cards. Mix, and let fester with the best (worst?) of whatever the internet can come up with. This game is playable both on the website, and is available on the Play Store.

The cards get rated against each other, and an automated process regularly culls the lowest performers. In principle, this lets the "best" cards float to the top, while cards that nobody ever picks get filtered out over time. In practice, the cards at the top tend to be the most outrageously horrible things imaginable.

Technology-wise, the server uses node.js and socket.io on the back-end, and was largely an experiment to see what all the fuss was about with node and websockets. The website came first, with the Android client being added afterwards when I wanted to tinker with Android's intent system a bit.

WARNING: The content on this game is 100% uncurated and unfiltered. Yes, there's a limit on the text length, but people have created some cards in that space that would make the devil blush.

When writing the enhanced version of All NPCs MUST DIE!, I quickly realized that I needed something to help with pre-rendered animated sprite compositing and pallette-swapping. I also realized that no sprite animation tool out there did exactly what I wanted. So, I built this small tool in Python to help with those needs. Even without needing the "export to spritesheet" function, it's kind of fun just to play with as an animated paper-doll generator.

Paperdoll-type sprites can be easily added from a variety of source formats by specifying which frames are located where within the source sheet. The tool even permits licensing and attribution information to be added to the definition files, so that when art is exported all one has to do to cover attribution requirements is to copy/paste that into the final product's credits.

Included with the tool is a small library of artwork, courtesy of Open Game Art.

When Left 4 Dead was originally announced, I immediately pictured a "Dawn of the Dead"-style survival horror game. When it was released, I was pleasantly surprised to see a more Danny Boyle-style action-horror game, but the original imagined vision stuck with me. The Romero Mod is a realization of that original (incorrect) vision, focusing on a slower pace and inducing a fear of large crowds of zombies into the players through a variety of subtle effects.

In many ways, Romero Mod is my best-received project. While it's true that people are very excited about the core game design principles at work, I do feel my part in its success is somewhat mitigated by the fact that it rests on the success of Left 4 Dead 2. Nonetheless, it's a blast to play with friends, especially if they're used to the core game and just go running into the hordes guns blazing.

Romero Mod is an open-source project. Fork this on GitHub!

This is a real-life semi-cooperative card game in the same vein as Munchkin (only less silly). It was self-published via the Game Crafter, and will probably be revived as a Kickstarter campaign at some point in the future.

The site hosts an online-playable - though incomplete - version of the game, written using node.js and socket.io. My goal is to eventually flesh out the game a little more, and then use it to promote a Kickstarter-funded print run of the actual game.

Any of these might come back to life at some point in the future, but don't hold your breath.

My most ambitious project, PseudoQuest is a full-featured retro-styled web MMO RPG. It's also my oldest project, and now the most dated. Written starting back in 2004 initially as a project to teach myself PHP and MySQL, this game achieved some limited fame courtesy of some free advertising from my then-employer, Xfire. Over 11,000 users registered for the game, and for a while there it had over 300 daily active uniques.

Technically, it's still alive, though literally nobody plays anymore. There are links to purchase in-game currency that are still live, but the payments won't actually be processed.

At one point in time, PseudoQuest had a client on the iPhone, though I've let that expire.

One of the more interesting features in PseudoQuest was the ability to do real-time PvP in a traditional RPG turn-based style. The players loved this feature so much that I created a copy of the game that existed only to facilitate PvP fights.

My first self-published card game! Players work together to save a bus full of children from being plunged head-first off a cliff, by baking a giant pile of doughnuts underneath the bus. If they succeed, the player who made the most money in the meantime wins. If they fail, the children die and everyone loses.

I've still got a couple thousand of these cluttering up my house, if you want a copy or 25. (This was published before the existence of print-on-demand games publishers).

"How hard could it be to make a Minecraft clone?" Well, the answer is: for the basics, not very. It had been a very long time since I'd written anything using OpenGL (3d math tends to make my head spin), but I thought I'd take another stab at it. It took me 2 days to get a single cube rendered on-screen the way I wanted, and another 2 or 3 hours to get a full world rendered using them. Cubist is written in Python, and is where I learned all about the GIL's limitations: when I decided that generating the meshes was too slow and tried to use threads to parallelize things, I discovered that I'd have to resort to multiprocessing to get the job done.

I got as far as dynamically generating "infinite" terrain using a variety of noise maps, some semi-fancy GL shaders (esp. for a non-3d programmer, I think), basic physics / collision, a day/night cycle for lighting, and acceptable performance for adding / removing blocks. I started in on a big refactor to make this network-playable, but then paused to pursue other projects and haven't returned to this in a long while.

I keep thinking that maybe I'll come back to this, adding features such as the aforementioned networking support and an easy-to-use mod library and management system. It sure was pretty.

The namesake for this domain, BeBS will always hold a special place in my heart. Some of the earliest code I ever ran on the internet, BeBS was a full-featured Citadel BBS clone, written in C++ and running on BeOS. I even wrote a door game for it, a miniature Legend of the Red Dragon clone called "Scary Caverns". As part of writing Scary Caverns, I put together an SDK for writing doors, but (predictably) nobody took me up on writing any.

While it's unlikely that I'll ever run Haiku as a server just for the purpose of running BeBS, I do occasionally think about it. More likely, I'll just fork the modern-day Citadel to add proper MySQL back-end support. You know, because what I really need is another project... ;)

Who is this guy?

Geoff is the proverbial jack-of-all-trades, with skills covering everything from leading engineering organizations to coding to product ownership to game design.

What is this stuff?

Each project here is an exploration - of a concept, of a technology, or just to see if it can be done. The skills learned from one project carry over into other projects, and the cycle is complete!

Where do you find the time?

Largely, I don't. Each project is an accretion of 20 minutes here, a few hours there. So, if you've ever thought "I could never make that!", this is proof that all you need to do is start small and persistence will take care of the rest.